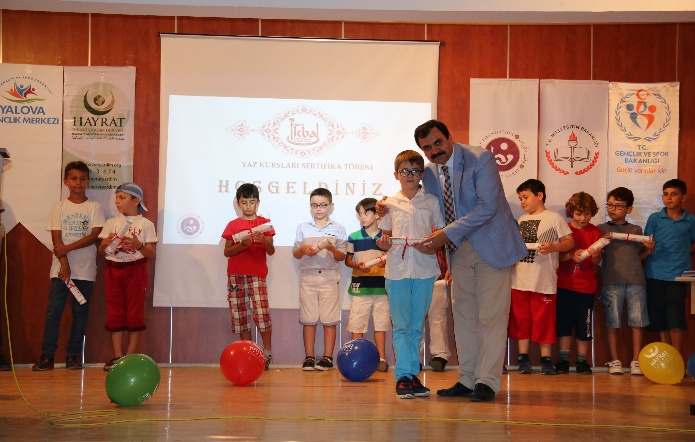 “Our belover Prophet (asw) says, ‘The best among you is the one who learns Holy Qur’an and teaches it.’ And Ali (ra), whom our Prophet described as the gate to the knowledge, says, ‘If somebody taught me one letter, I will be his slave for forty years.’”

Mr Demir continued his speech mentioning the serious works of Hayrat Foundation about the Qur’an education:

“Since 1974, Hayrat Foundation has carried out serious activities on the Qur’an and Qur’an education with its volunteers in line with the glad tidings of our leaders, our beloved Prophet Muhammad (asw), Hazrat Ali (ra), and others, so that we can be honoured with this blessed service. Being aware of this blessed aim of Hayrat Foudation, as Yalova İkbalder we have made a five-week program of Qur’an education as a summer school. Thanks Allah (swt), we completed the program with our students many of whom are here now. I congratulate all of them on behalf of myself and my colleagues. May Allah grant them and their families and us to live a life with the Qur’an. Ami.”

Mr Demir finished his speech thanking the students, the families and the institutions and organizations that supported the summer school.

“July 15th night was actually an attempt of invading the Republic of Turkey by our enemies and evil power groups who agreed to occupy our homeland. Our people took to the streets, risked their lives and defended their country for our flag, religion and sacred values.”

The most enthusiastic part of the ceremony was that the students presented what they learned during the summer school to the present audience watching excitedly. The way the children read hadiths and fiqh rules by heart highly pleased the audience in the hall.

Yalova provincial director of education, director of public education, and director of youth centre gave the certificates and gifts to the students. Top scoring students of every class were given tablet pc.

The ceremony ended with a prayer and offering. A life dedicated to iman