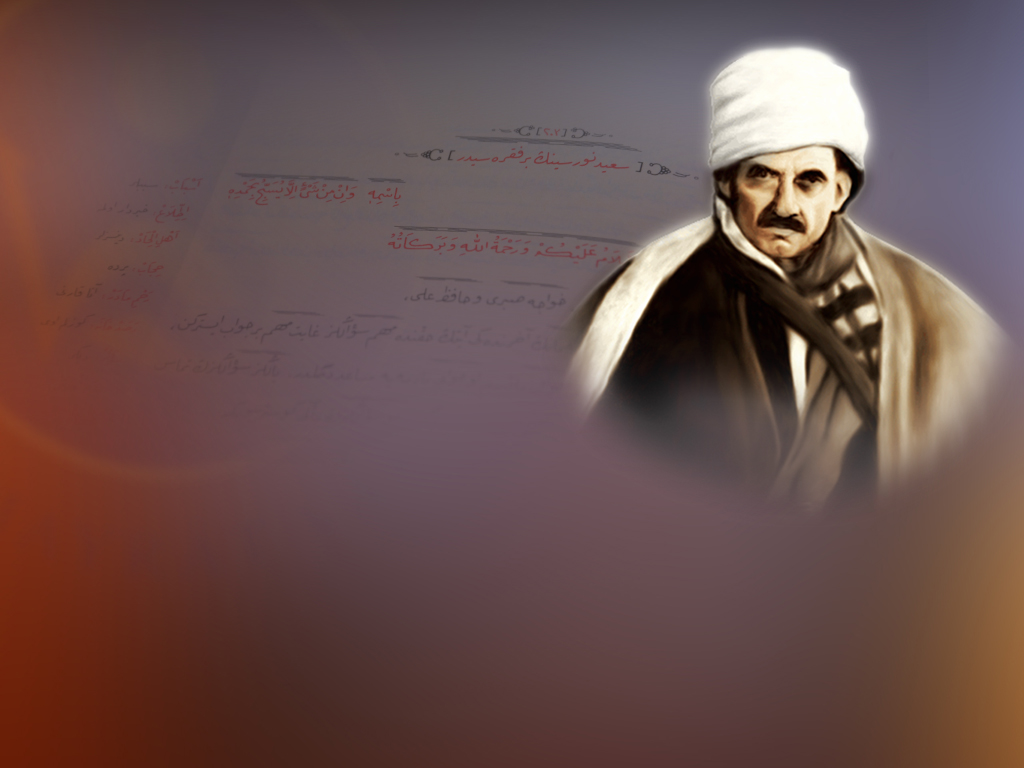 “I have just one purpose. That is; as I get nearer to my grave, we hear the sounds of Bolshevik owls (supporters) in this country of Islam. These sounds damage the tenets of faith of the Islamic World. It captivates the public, particularly the youth, by making them faithless. Fighting against them with all my strength, I am inviting the youth and the Muslims to faith. I am struggling against these faithless masses. Allah willing, I wish to enter Allah’s presence through this struggle of mine. This is all I do.”
Bediuzzaman Said Nursi

An Eminent Scholar of Islam, Imam Bediüzzaman Said Nursi was born in 1877 AD (1298 AH) in Bitlis, eastern Turkey, then Ottoman State. At a young age, he gained the admiration and affection of all classes of folk and the scholars throughout the whole Eastern Province of Ottoman. As well as his strong memory and intelligence, he was known with his purity, taqwa (avoidance of sins), and courage. He never hesitated to declare the right way (amr bil ma’ruf) and condemn the wrong way (nahy anil munkar) against unjust leaders and governors of the time. People mentioned of him as “the famous Mullah Said” in those years.

In 1893, he went to the city of Van upon the invitation of the governor, and for 15 years gave lectures there. During those years he studied and mastered positive sciences, as well. He even won debates against the teachers of chemistry and geography.

In 1898, he read news in a paper the governor showed, which would be a turning point in his life. In that news British Minister of Colonies Gladstone had said to the British Parliament as he held the Quran: “We cannot rule over the Muslim as long as this Quran remains in their hands; we must do everything possible to remove the Quran away from Muslims, or alienate them against the Quran.”

Those words distressed him, but caused him to take a decision that would change his life: “I will show and prove to the entire world that the Quran is a never-fading, inextinguishable spiritual Sun.”

According to Imam Nursi, best solution to combat the plot to destroy Islam was to educate Muslims so that they surpass the West both intellectually and scientifically.

So he advocated for the establishment of an Islamic university in Eastern Anatolia, which he named “Medresetü’z-Zehrâ” where he planned the positive and religious sciences to be studied together to raise scholars and scientists for the needs of the age. He said, “The light of wisdom is positive sciences; the light of conscience is religious sciences. When two are combined, truth arises thereupon.” This Islamic university were to serve three goals:

1-Eradicate the conflict between so-called scientific thought and religion by teaching Islamic and positive sciences together.

2-Finish the conflict between the regular school (maktab), the theology school (madrasa), and the dervish lodge (takkah).

3-Attract students from the entire Islamic world to promote the unity and solidarity between Muslims. He went to Istanbul to realize this idea. However, he could not completely accomplish what he wished for. He did not return home and preferred to stay in Istanbul, and initiated a struggle in social affairs.

After March 31st Incident, he was tried in a Martial Court and was acquitted. Then, he went to Tiflis via Batumi and then to the city of Van. He visited the tribes around Van, and he tried to educate them through his social, cultural and scientific lessons. After Van, he went to Damascus. Upon the insistence of the scholars in Damascus, he delivered a unique sermon in the Umayyad Mosque to a huge congregation of nearly ten thousand, a well hundred of which were prominent scholars of Islam. This magnificent sermon, which sets forth the problems of today’s Islamic World and their solutions, was later published under the title “Damascus Sermon”.

He fought in the First World War as the commander of a militia regiment that he formed out of his own students. During the war, he wrote his letter-based commentary of the Quran, called “Isharat-ul I’jaz” (Signs of Miraculousness), which is regarded as a marvel in the field of Qur’anic commentary. When Bitlis was occupied by Russians, he was injured and sent to Siberia as a POW. In Siberia, he led a life of captivity for two and a half years. Subsequently, he escaped and arrived at Istanbul on June 25th 1918, via Petersburg, Warsaw and Vienna.

In 1920, when Istanbul was occupied by the English army, he struggled against them. He supported the movement of The National Independence Army. The newly formed Turkish government in Ankara appreciated his activities in Istanbul and invited him to the new parliament. He went to Ankara but was displeased at what he saw there. Most of the assembly members were ignorant of Islam and not observing the prayers. He issued a declaration to explain the importance of performing the prayers, upon which many resumed the prayers. Although The Independence War was won, the European style of thinking and living was spreading whereas attachment to Islam and faith was weakening. Being saddened by this fact, he went to Van after refusing many worldly offers to keep him in line with Ankara.

He started to lead a life of seclusion on Mountain Erek of Van, lecturing only few students and busying himself with reflection and worship. After a short time, Sheikh Said Rebellion broke out. Though he had no connection with this rebellion other than name similarity, he was exiled first to Istanbul in 1925, then to Burdur and Isparta, western Turkey. Then he was brought to Barla, a small town of Isparta. But that exile became the beginning of his great spiritual jihad in the way of serving the faith, as well. Risale-i Nur Starts to be Written in Barla

In Barla, he started to write the Risale-i Nur Collection which has become a means to prove the pillars of faith and Quran, and to obtain verified belief. He wrote three fourths of the Risale-i Nur (The Words, the Letters and the Flashes) that mainly articulates the tenets of faith.

He used an extraordinary method to distribute these works to the entire Anatolia (Turkey). He demanded his treatises to be transcribed in Qur’anic letters if people wanted to be his students. In those years when people were made to forget the Qur’an in all respects, Risale-i Nur Students who gathered around him in Barla and Isparta were preserving the Qur’anic letters by insisting to use them and duplicating the treatises. As the number of people duplicating the treatises multiplied, Risale-i Nur was secretly distributed all over Turkey in a short time. In this way people in Turkey could get rid of the doubts about their religion and strengthened their belief. “Man does cruelty, but destiny does justice.” Enemies of Islam had isolated him in a village, but Allah sent him excellent students as helpers.

Such rapid spread and impact of the Risale-i Nur disturbed some people of the time.

He was brought from Barla to Isparta in 1934, and a year later he and his 120 students were arrested and tried in the Heavy Punishment Court of Eskişehir and sentenced to imprisonment. Thereafter, he lived through a six years (1935-1943) of exile in Kastamonu, northern Turkey; trial and imprisonment in Denizli (1943), exile in Emirdağ (1943-1948), trial and imprisonment in Afyon (1948-1949), and a second exile in Emirdağ (1950- 1953). He was under constant surveillance and poisoned many times. His strategy was to attract the attention while relieving the students elsewhere. He corrected the hand written treatises that his students brought. He often took walks in the fields. Agents constantly watched and disturbed him. Despite all those problems, restrictions and oppressions a strong faith lesson quickly spread all over Turkey, Alhamdulillah.

In March 1960, he became severely ill. He made farewell to his friends and students, and left for Urfa, eastern Turkey, with a few of his students. After a troublesome journey due to the deterioration of his health and the harassment of the police, he arrived at Urfa.

In Urfa his hotel room was flooded with visitors while the police forced him to return. People raged against police, and prevented their taking him back.

The next day, his funeral was carried by masses from the Ulu Mosque to the Mosque of Halilurrahman where he was first buried.

Two months after his death, a military coup seized power on May 27th 1960. On July 12th 1960, the coup officials opened his grave and his honourable body was taken to an unknown place, possibly to Isparta. Rahmatullahi Alayh.